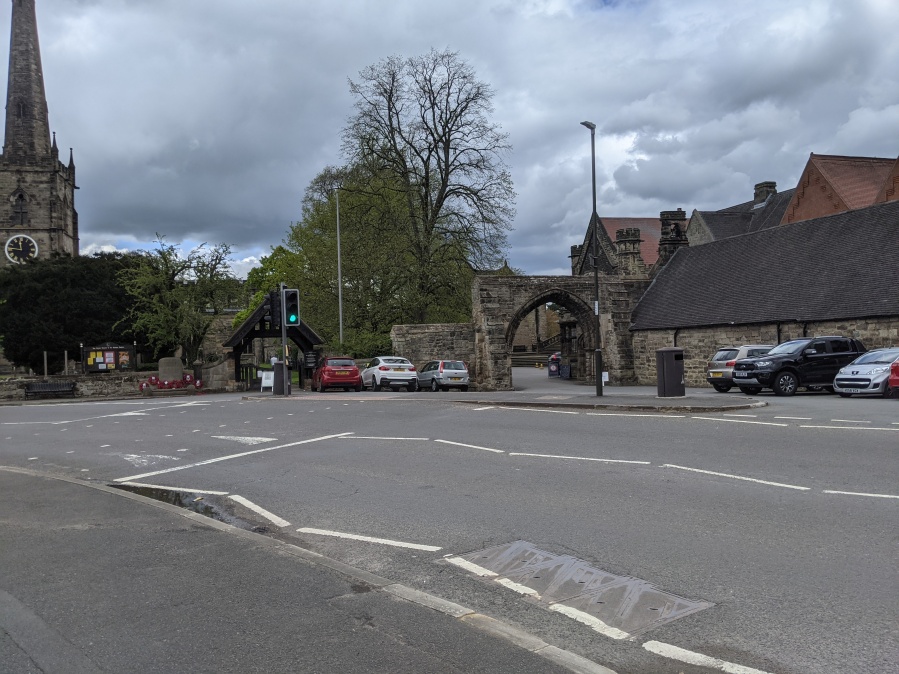 It was a fine and sunny May day when I left the house to have an explore around Willington, Repton and Newton Solney. At least it was when I left the house. “What sort of weather did you have on this trip?” I hear you ask. All of it, would be my answer. It rained, it was sunny, the wind was blowing, it was hot and it was freezing cold.

I took the train up to Willington from Burton, and left the station to walk towards the canal. Last September, I walked the Trent and Mersey Canal from Burton to Willington, and this time I was going to walk up to Mercia Marina, just north east of Willington.

I crossed over the bridge pictured above. As nice as it looks, it also looked like it was made as a school project out of Meccano and old railway sleepers. Having safely made it over, I found myself at Willow Spiral, a small nature area created in 2015 with a large pond in the middle.

From Willow Spiral, I walked along the edge of Mercia Marina without actually going into it. The marina is said to be the largest inland marina in Europe, with shops, eating places and luxury holiday lodges available to rent. It was opened in 2008 and is one of the most popular tourist destinations in the area.

I headed back to Willington, down Findern Lane. I had to cross a railway level crossing over the Derby-Crewe line which branches off from the Midland Main Line nearby. I made it over safely and carried on back to Willington, from where I would head to Repton. I stopped to admire St Michael’s Church on the edge of the village before I got to the bridge over the River Trent.

It took me about 10-15 minutes to walk into Repton from Willington, during which time the weather changed from glorious sunshine to light rain.

I had been through Repton a couple of times before, but never for more than ten minutes while walking through from Willington to Burton. The village is most famous for Repton School, a fee-paying school for both boys and girls, although girls were not allowed there until the 1970s. Famous alumni of the school include the author Roald Dahl, Watford FC footballer Will Hughes, comedian Graeme Garden (of The Goodies fame) and television personality Jeremy Clarkson, who studied there in the 1970s.

Repton is a very historic village in Derbyshire, noted for St Wystan’s Church, the aforementioned Repton School and the Anglo-Saxon Repton Abbey and medieval Repton Priory, neither of which still exist today. There are a number of local shops and businesses in the village’s High Street, which I walked down on the way to Well Lane, which would take me back to the main road back to Burton.

Well Lane has a few big houses with lovely gardens, and comes to an end at the entrance to a farm. There is a small gateway at the end that leads onto a residential street, which then leads onto the main Burton Road. My next port of call was to be Newton Solney, a small village in Derbyshire with a population of around 650. It has a primary school, two pubs and a church, St Mary The Virgin’s. It also has a large four-star hotel, The Newton Park Hotel, which recently reopened after being taken over by new owners.

I walked up the lane to the church, where I was surprised to see two live donkeys in a field. I had a little wander around the graveyard of the church, but it soon started raining (again), so I had to start heading for home. It took about an hour to walk from Newton Solney back to Burton, during which time the weather changed about seven times from sunshine to heavy rain. The views from the road down to Burton from Newton Solney are quite nice.

After four hours and over eleven miles of walking, I was glad to get home. It was a good day out; I saw some places I had never seen before and the weather was quite pleasant, most of the time. Mercia Marina seems like a nice place to visit, you don’t have to go there by canal boat, it has a car park and is also served by nearby bus stops.

Thanks very much for reading, and you can follow the blog in all the usual places. Links can be found here: https://linktr.ee/martynsblog