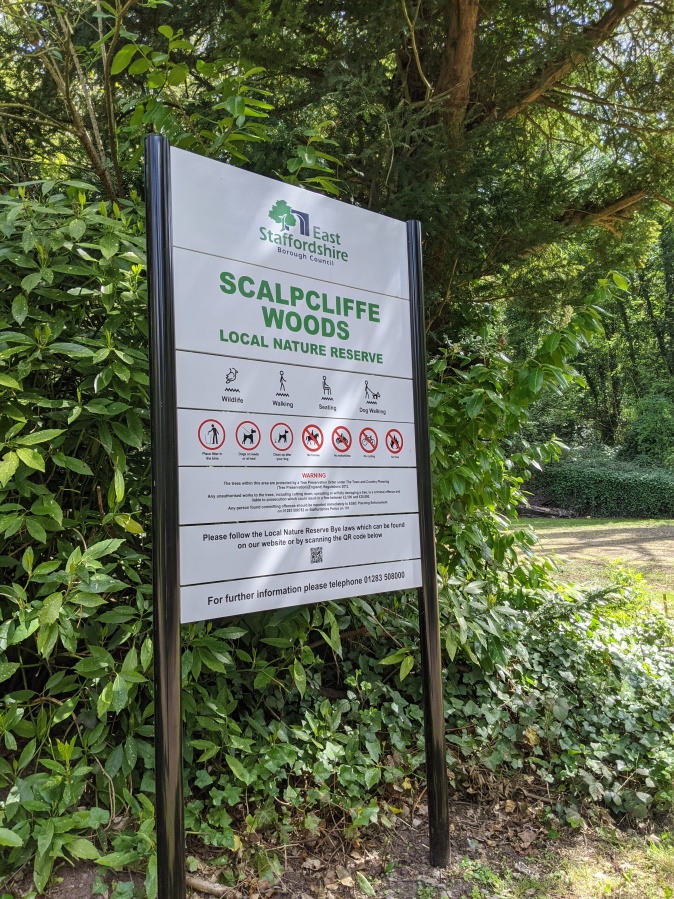 One of the local places in Burton on Trent (Stapenhill, to be exact) on my long list of places to visit was Scalpcliffe Woods, a nature reserve located near Stapenhill Cemetery. So, on the last day of April 2021, I set out on the journey there.

I was expecting a nice, leisurely stroll around some pathways, admiring the flowers and perhaps spotting some wildlife. What actually happened was nothing like what I expected. The Stapenhill Road entrance to the woods is adjacent to a local nursing home. I walked through the gate and found a pathway. I was disappointed to find it was a steep hill, but I followed it anyway.

The paths were very steep and I was a little worried that I would slip and fall. It was a dry day, so at least they weren’t muddy. Also, the paths split off in several directions, and I wasn’t sure exactly where I was going. At one point, I came across a large tree which had fallen and blocked a pathway. Someone had cut a couple of chunks out of it, which I presume were so they could try to calculate the age of the tree from the rings.

I ducked under the tree and followed the path, but it just seemed to come to an end, so I went back. The path on the other way also just ended. I didn’t fancy going back down the hill, so I was a little bit stuck. The weather was getting warmer, and I didn’t take any water with me. I found that there was a third way out, so I followed that until I came to a clearing with views of Stapenhill on one side and Winshill on the other.

I followed a path which took me down a flight of stairs, which led to a gate. I wasn’t exactly sure where this gate was, until I saw a graveyard, and deduced that I was at the top of Elms Road, and the graveyard was Stapenhill Cemetery. From there, I made my way down the road to Stapenhill Road, from where I walked home.

In summary, if you were planning a visit to Scalpcliffe Woods, I would advise you to wear proper footwear and take water. It’s probably easier to walk up there from the Elms Road entrance than the Stapenhill Road entrance. It’s worth it for the views around the town.

Thanks very much for reading this post, and you can follow the blog on all the best social media platforms. The links you will need are here: https://linktr.ee/martynsblog

One thought on “Scalpcliffe Woods, Stapenhill”