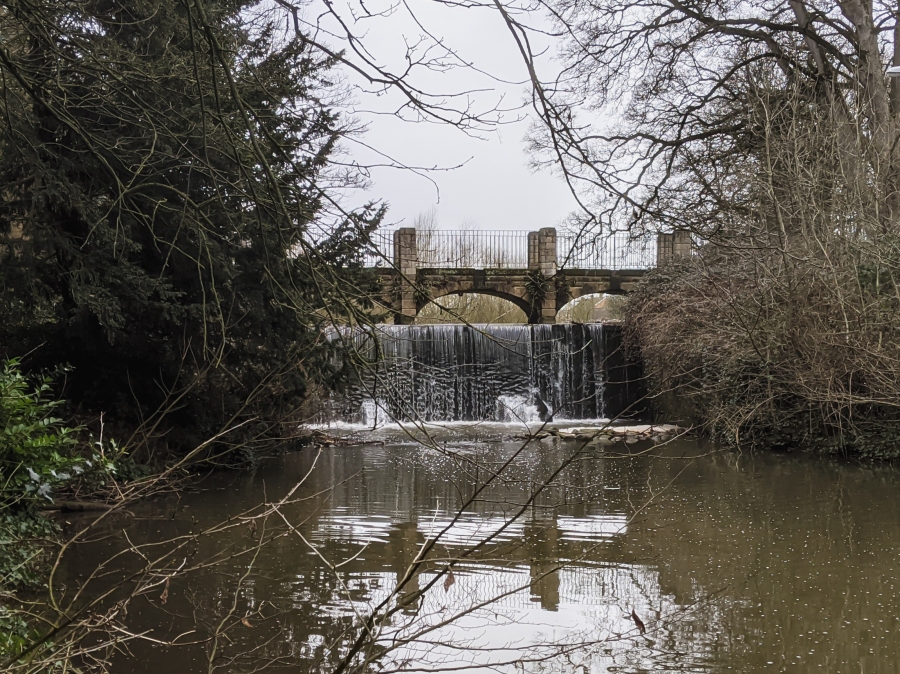 Welcome to the first new travel post of 2021. Even though lockdown restrictions are still in force, and non-essential travel is not permitted, we are still allowed to go outside for exercise in the local area. When I originally planned this trip last year, the plan involved saving a bit of time by catching a bus to Rolleston-on-Dove, and then having a look around. Instead, I decided to walk there and back home. It took three hours.

I have been a regular walker to Rolleston-on-Dove for about five years. Normally, I just walk through the main road of the village, and either go up the Jinnie Nature Trail or walk around Stretton to get home. However, I decided on Wednesday 17th March 2021 to have a bit of an explore around this historic village, located about 2.5 miles from Burton on Trent.

The first point of interest I got to was on the edge of the village, at the top of Beacon Road. The Queen Elizabeth II Diamond Jubilee Community Orchard was created in 2012.

Further down the road is the centre of the village, and the oldest part of Rolleston-on-Dove, the area around the Alder Brook which runs through the village. Within that area is Brook Hollows, a park with paths to walk on and a couple of bridges. The centrepiece of the park is a waterfall which flows under a bridge, and is a spectacular sight to see.

As you can see by the pictures above, the pathways can be quite muddy, so if you were thinking of visiting the area, it’s best to wear Wellington boots and not your best clean trainers. Mud would be a recurring theme on this trip, as you will see later on. From Brook Hollows, I walked down Burnside, one of the oldest parts of the village, towards the Spread Eagle public house.

Burnside has some of the oldest buildings in the village, with some dating back to the 11th century. Behind the Spread Eagle is the Croft, the Rolleston on Dove village green. Across the road from there is the former Victorian Commemoration Hall, which is now part of The Rolleston Club, a community venue which includes a café and bar.

I rounded the corner on to Church Street, which is where The Spread Eagle pub stands on the corner. Next door to the pub is St. Mary’s Church, the village’s parish church. Parts of St Mary’s Church date back to 1130. It was extensively renovated in 1892. There are two entrances to the church, the southern entrance faces the road and was reserved for members of the Mosley Family (who owned the former Rolleston Hall, most of which was demolished in the 20th century), local landowners and those who made a financial contribution to the church. Everyone else had to use the north entrance around the corner.

In front of the church is a lychgate, which incorporates a war memorial. The names of men who died in the First and Second World Wars are inscribed on wooden plaques within. I had a walk around the grave yard before I headed back over the road to Brook Side.

Across the road from the Spread Eagle is the village sign, erected in 1995. Near Brookside is a small bridge which crosses the Alder Brook, which runs alongside Brookside.

I had a walk up Brookside, where I passed by the former Brookside Hotel. It is a Grade II listed building which is currently undergoing building work, having closed as a hotel in recent years.

Time was getting on, and I needed to move on as well, so I walked down Station Road, the main road in Rolleston, down to the Jinnie Trail entrance.

The Jinnie Nature Trail is a linear park which incorporates the former Rolleston-on-Dove railway station site and is maintained by a group of local volunteers. I wrote a more in-depth article about the former railway station, and all the other stations on the now-closed line, which you can view by clicking here.

As I mentioned before, it was very muddy underfoot. If you ever walk the Jinnie Trail, I recommend wearing proper footwear.

Rolleston on Dove is a very nice village, in my opinion. There’s lots to see and do there, and plenty for families to do as well, like the Tafflands Adventure Playground located off Meadow View. In addition to the Spread Eagle, there’s a pub called the Jinnie Inn near the Jinnie Trail entrance. If you like cricket, there’s a cricket club nearby as well.

Thanks very much for reading this. If you want to follow the blog on social media, send an email or even donate a small amount of money to the blog, then all the details can be found on the About and Contact page.