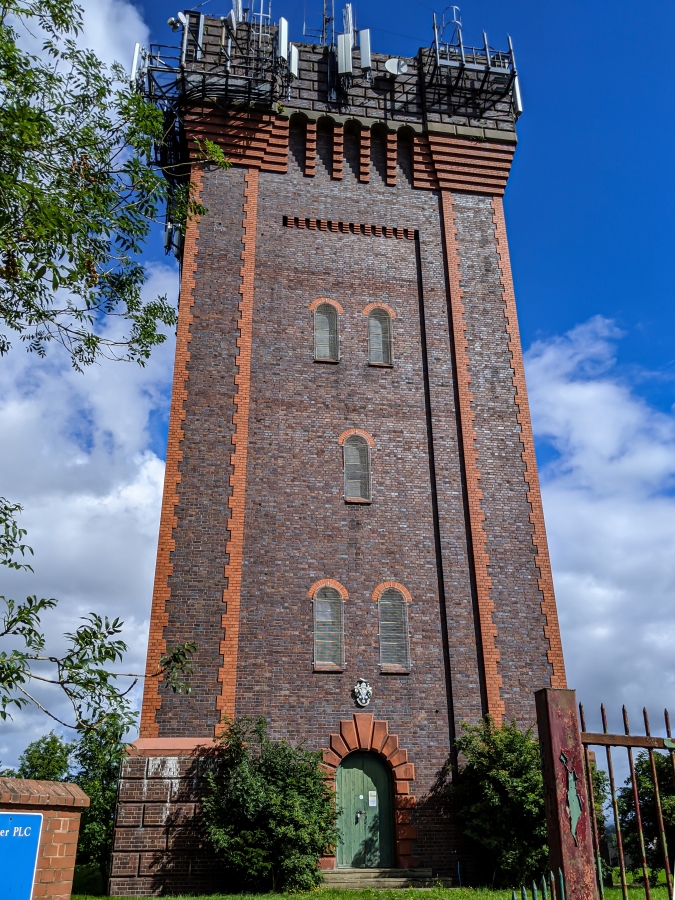 Winshill Water Tower, also known as Waterloo Tower, is a former water pumping station located high up on a hill overlooking Burton on Trent in the area of Winshill (pronounced win-sill).

Having lived in the Burton area for many years, I have seen this place from afar many times, but never got around to exploring it close-up until today, Monday 20th July 2020. On a warm and sunny morning, I set off from home and walked for almost an hour before I got to Tower Road, a private residential road leading to the tower. The road has no pavement, but it’s quiet enough to walk down and admire the residents’ gardens on the way to the tower.

Having never seen it at such close quarters, I was taken aback at how big it actually was. It stands 100 feet (30.5 metres) tall (not including the various masts attached to the top).

In the early 1900s, residents of Winshill complained to the local water company about poor water pressure from their taps. One resident, a Mr. Harry Mills, took matters into his own hands in 1905 and sued South Staffordshire Waterworks Company at his own expense. Fortunately for him, the court found in his favour, and forced the waterworks company to remedy the situation. Mr. Mills was awarded a sum of money for his troubles, as well as an illuminated house sign for some unknown reason.

Construction of the tower took place in 1907 at a cost of £6,500 (around £800,000 in 2020 money). It was built from Staffordshire bricks, with details picked out in different coloured bricks. There are five arched window frames on each of the four sides, and an arched green front door adorned with what I assume is the coat of arms of the water company at the time. The tower housed a large 80 feet tall water tank which was filled with water pumped from an engine room at the bottom of the hill, which kept the residents of Winshill supplied with water until the 1990s.

During the early days of aviation in the early 20th century, special flying events were often held at Bass Meadow, on land just off Trent Bridge. Due to its high location, the water tower was used to display flags of different colours denoting what was happening at the aviation shows. For example, if wind conditions meant it was unsafe to fly, or that another flight was imminent.

As has been the case with many of Burton’s landmarks, it was threatened with demolition after it fell out of use as a water tower in the 1990s, but was saved from that fate due to its status as a prominent local landmark. At the moment, it isn’t a listed building. These days, it plays host to various mobile phone and communication masts.

The view from near the tower is spectacular on a clear day. Various pathways lead from the town up to the tower and Waterloo Clump, a small wood planted by locals to commemorate the Battle of Waterloo in 1815. Another small wood nearby, Tower Wood, was planted in 1996. A children’s play area is also located nearby, along with a very steep path which leads down from there to the Brizlincote Valley housing estate.

Thanks for reading this post. You can follow Martyn’s Blog on all the best social media sites. You can find the links at linktr.ee/martynsblog.