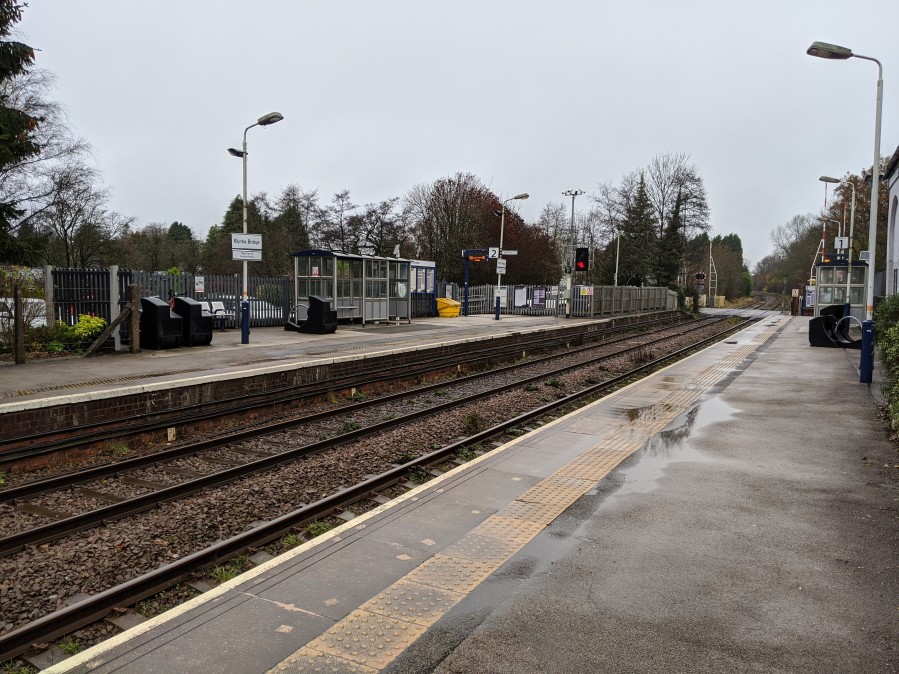 On a grey and drizzly November morning, I headed to Burton on Trent’s wonderful railway station. Work outside the station is still ongoing to put in new bus departure bays, but it looks like it might be finished before the end of the year.

I made my way down the old staircase on to Platform 1, heading northbound towards Derby to catch my next train. The train was running a couple of minutes late, probably due to the wet weather, but not late enough to impact my connecting train to Blythe Bridge, my destination for the day.

The train eventually pulled in to the station, and I boarded it. There weren’t many people on it, but I sat in the vestibule anyway, as I often do when I am just going to Derby. It’s only a ten minute journey.

My train to Blythe Bridge was standing on the platform at Derby when I arrived, so I boarded it and sat down. It was one of those antique single-coach trains that East Midlands Railways use. A Class 153, I believe. The guard informed us passengers that he was switching off the heating, and that we should let him know if it got too cold. The train wasn’t that busy as it left Derby and headed back down south. It called at Tutbury & Hatton and Uttoxeter, both of which I visited back in March of this year, and then it arrived at Blythe Bridge around half an hour after leaving Derby.

Blythe Bridge railway station opened on the Crewe – Derby line on 7 August 1848. It was originally called Blyth Bridge until 1907, when it gained an extra ‘e’. There are two platforms, each with a waiting shelter. Other facilities include a car park on the Crewe-bound platform side, dot matrix displays, a help point and information/timetable boards. There is also a level crossing between the two platforms.

The station buildings at Blythe Bridge were demolished in the 1990s. I looked up some old pictures of the station online, and they looked magnificent. It seems a shame that they had to go, but I suppose railway stations cost money to maintain and staff, and if there is no need for them, then they have to go.

There isn’t really a lot to see and do on a rainy Tuesday morning in Blythe Bridge, so I just had a walk around the place, up to nearby Forsbrook and then back to the station. I stopped to have a look at a war memorial outside a church, which has a statue of a “Tommy” stood underneath a cross, which I found quite poignant. I made my way back to the station, and then waited for my train. I was there a bit too early, but I passed the time on my phone, then boarded the train back to Derby. It was a bit busier than the train before, but I still got a seat. Half an hour later, I was back in Derby, and then I caught the train back to Burton. Typically, the sun came out as soon as I got home, it having been raining for most of the morning.

I don’t know where or when my next train trip will be, but I can guarantee I will be writing about it on here. Thanks very much for reading.